How does a community function?How does it come into being?Who does it leave out?Which rules does it impose?And what can be achieved together, that would be difficult or impossible to achieve alone?

These are some questions for which  we were and are looking for answers in the Tanzfabrik right now. We had the chance to get in contact with Jo Parkes and adressed these questions to her, too.

Jo Parkes is a freelance dancer and video artist based in Berlin and the UK. She creates live work mostly for public spaces and videos. In her research for the project “On Tradition”  she aimed to establish closer contact with the Uferstudios’ immediate neighbours.

community, On Tradition and the events in the UK …

„I think On Tradition, made in 2015, (and the annual project In Residence of which it is part) is, in part, a search to find my role – our role as dance artists – in the local community around Uferstudios. It is an attempt to make a tangible contribution to the community of  Badstraße.“

„I walk down the street often on my way to Uferstudios, passing the same people, maybe saying hello, but not knowing much about them or interacting with them. I have often experienced this in cities: people from many different countries and cultures live in close proximity but often do not interact beyond the superficial level of sharing space and offering each other services.“

„The process of making the films put me in situations where the protagonists of the films were sometimes incredulous at the work that I do and asked me fundamental questions about its purpose. In the process of making On Tradition, I heard myself saying:
“I cannot cut hair, or make a great gosleme, but I think I am good at telling stories – and also at  creating interactions which might be interesting for us all.”
I enjoy the challenge of finding out what my relevance is. My search for responses to the questions I am asked takes me deeper into my work – and initiates process where the protagonist and I seek the answers together. With each person, I wanted to make the film that only we two people could make together. It is a film I cannot imagine in advance because I do not know what will happen in the process between us.“

„In On Tradition, I wanted to frame elements of the everyday to draw the watcher’s attention to them. Over a period of 6 months with a team of artists (cameraman Sven O. Hill and editor Lena Hatebur key among them), I made 12 portraits of people working on Badstraße and we installed the films in their shop windows for 2 weeks. The films were an invitation not just to walk by, or pay for your juice, but to engage with the person who is offering you the service – maybe to talk to them for a moment. I hope (and hear from audience members and participants) that the films initiated a series of fragile interactions – even connections –  between people who might not usually talk to each other – some social glue, if you will.“

„Each person worked with me to select a tradition which it is important to them and to reflect about how they have taken and adapted this tradition to make is useful in their daily life. What do you that your parents did before you? How do you do it differently? How do your children do it differently?  I wanted to investigate tradition not as a restricting force or a force of exclusion of others (which purpose it increasingly serves in our current time) – but as a useful, muscular part of daily life, a force which adapts, expands and integrates new elements. How do we edit, refine, open our traditions as we meet and interact with others from different backgrounds – what do we keep and what do we throw away?“ 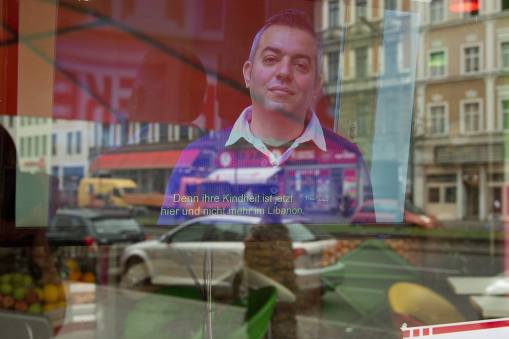 „I went back to visit the protagonists of the films when we showed the installation in Uferstudios at the beginning of July this year. There were delicious drinks, inquiries about the health of my parents and many provocative questions about the Brexit vote which had just taken place, which I answered over the course of several hours. It is, of course, part of my colonial inheritance that I am not often forced to negotiate my nationality in my daily life in the way that many of my co-creators on the project do.“

„A sense of belonging, a sense of community, is always created by excluding others – those who belong and those who do not. I am horrified, however, by the ugly, self-protectionist, racist forces which drove the Brexit decision and feel deeply alienated from my own nation. I was grateful for the space Ahmad and Ramazan gave me to articulate this to them and the pong-pong of reflections we shared on an the unreflected national relationship to history we Brits have, the failing of the education system, the idiosyncrasies of island nations and the role of fear in our times. It was some useful social glue which made me a little more able to go back to Uferstudios and be in the public eye at a time when I simply wanted to hide…“