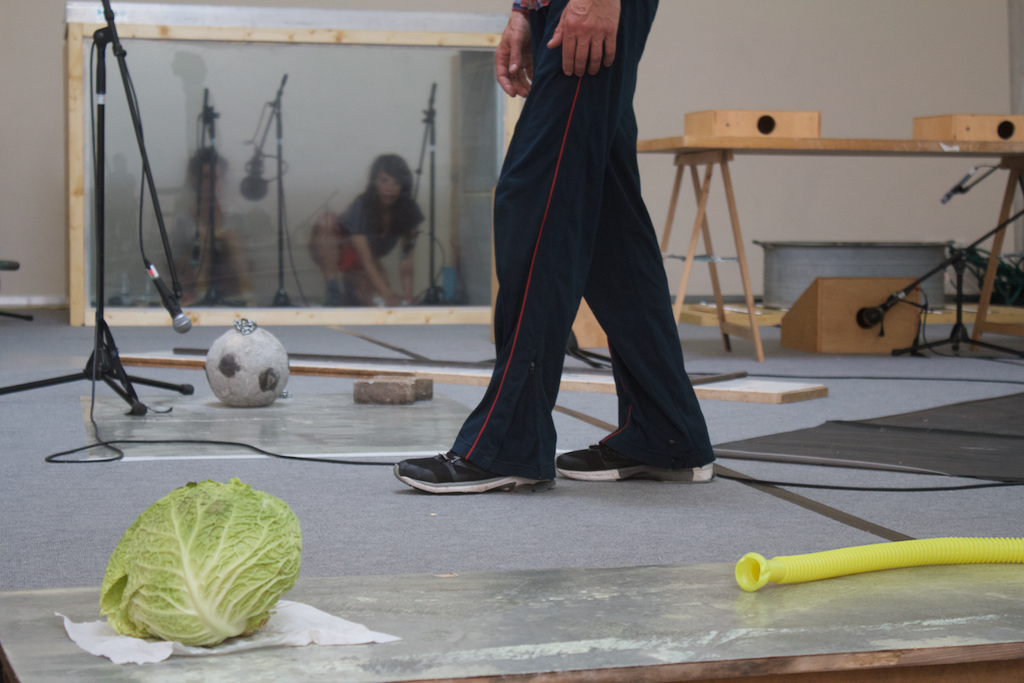 On June 9th Tanzfabrik/Wedding will present the premiere of „Unheard of“ by Kareth Schaffer. As the production enters the phase of intense preparation, we had the chance to talk to Kareth about her new work.

Dear Kareth, can you tell us a little about how the idea for „Unheard of“ came up?

I started working on what would become „Unheard Of“ two years ago, when I spent a rainy afternoon in Brussels musing with my collaborator Boglárka Börcsök on the limits of dance – its very ephemeral relationship to things beyond itself.
We were basically trying to answer the question „How does a body point outside itself?“, and nearly as a joke I started talking about foley artists, how their movements actually serve something else entirely…and then we realized that this might be a really good idea.

How did the work develop from this starting point? And which role do your collaborators play in the process?

I started working on foley almost immediately, and did a first showing at Tanzfabrik a few months later. I needed some help with amassing sound-making objects and a good outside eye, so I asked Cathy Walsh, who has an unbelievable talent for sorting, storing, and finding things. I also needed some sound advice (up till then I had no experience working with sound), and a friend introduced me to Manon Parent, who’s both a musician and a dancer. Later that year Boglarka and I did a research residency in Düsseldorf with Tanzrecherche NRW, and we again needed audio advice – turns out that Niels Bovri, whom I knew from HZT, was currently living there and had years of tech experience. It was more or less an awesome series of coincidences, but safe to say that we’ve all been working towards this for a long time. 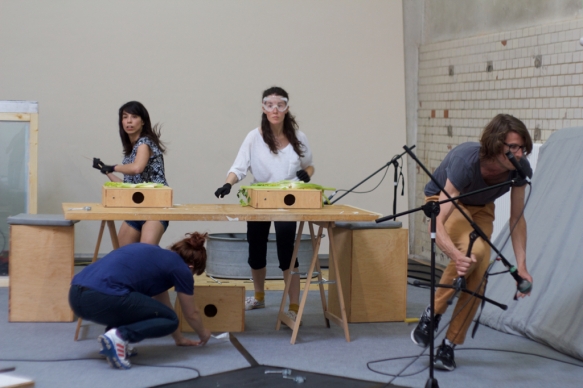 „Unheard of“ refers to the Aesthetic of Cinematography and the field of audio post-production. Did you have certain genres or movies in mind while developing your work, maybe even a certain decade?

We have nearly always focussed on films where physical transgression was central to the plot: horror films, thrillers, war films, nature documentaries. This is also where foley has had a significant cultural impact on our collective sound archive. As someone lucky enough to live in relatively secure circumstances, the only imagination I have of the sound of a breaking bone (or even something more chilling, like the ripping off of human flesh), is from the movies. There’s a tension and a responsibility there, which also relies on the film audience’s fascination with violence. We are dealing with this admittedly ambivalent situation in the performance.

The piece also aims to make an invisible art more visible – what do you think are the reasons why the sound making often remains unseen or unmentioned in the discourse?

It’s probably the least sexy part of film-making. Foley only comes after the stars, the stunts, the sets. Just some people in a recording studio whacking vegetables. And it’s also a dying craft – sound archives do wonders these days. But I think that a surprising lot of people know about it, and it seems to be enjoying something of a renaissance in pop culture. I’ve come across several performance pieces dealing with foley, and even a film. 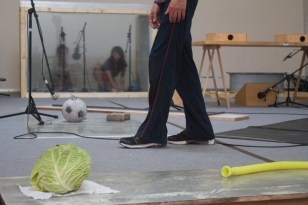 Moreover, you are part of the collective Temporary Archipelago which will have two showings at Tanzfabrik alongside with „Unheard of“ – what is the focus of the group and what will the new pieces deal with?

Temporary Archipelago was founded in 2014 with my colleagues Ana Laura Lozza, Lee Meir, and Claudia Tomasi – three really wonderful choreographers with really distinct styles and questions. We wanted to create a platform where we could better juxtapose our individual works, and this has largely remained our cause. On June 10th and 11th, Ana Laura Lozza is presenting „The Vanishing Meeting,“ a collaboration with Barbara Hang, that focusses on how a group practice become an individual one. Lee Meir will show „fourteen functional failures,“ or at least, some of her failures, short solos dealing on the connections between movement, sound, and language.

Thanks a lot for the answering our questions!

Combi-Tickets of both performances can be purchased HERE!

Tickets for all events can be reserved under the following mail adress: ticket_at_tanzfabrik-berlin.de